In early March 1987, a private investigator called Daniel Morgan told friends that he’d uncovered evidence of major corruption within the Metropolitan Police, which he planned to share with the media. Days later, he was murdered in a pub car park in Sydenham, south London. 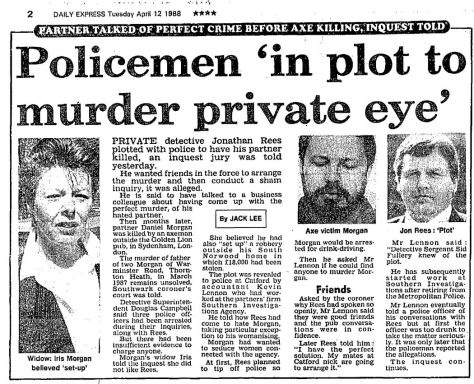 Nearly 30 years on, after five separate police investigations into the killing and some decidedly suspicious goings on behind the scenes, the case remains unsolved – making it one of the murkiest, and most conspiracy-laden, stories in the Met’s long history.

Podcast 1:  Luckiest Mugging in the World

Daniel Morgan ran a detective agency called Southern Investigations. The night he was killed he had a 90-minute meeting with his business partner Jonathan Rees at the Golden Lion. At 9pm he left by a back entrance to get to the car park, a Rolex watch on his wrist and £1,100 in his pocket.

He was later found lying on the ground near his car with an axe embedded in the side of his head. The Rolex was missing but the cash remained.

The following month Rees, his brothers in law Garry and Glenn Vian, and Sid Fillery, one of the Catford police station detectives initially assigned to the case, were arrested, only to be released without charge.

At the inquest in 1988, the bookkeeper at Southern Investigations alleged that Rees and Fillery planned the contract killing. By this time Fillery had retired and joined the agency as Rees’ new partner.

The pair went on to carry out work for a number of tabloid newspapers including the News of the World and are said to have provided the information for exposes of celebrities, politicans and royalty.

A second inquiry by Hampshire Police began on 24 June 1988 following a complaint by the Morgan family to Home Secretary Douglas Hurd. Rees was again arrested, but the charges were dropped.

For more on the corrupt practices of the met police – there was an informative article written in the DailyMail by Richard Pendlebury and Stephen Wright.

Daniel Morgan was a private investigator who was murdered in the car park of the Golden Lion pub in Sydenham in March 1987. He was said to have been close to exposing important police corruption. His death was the subject of several failed police inquiries and in 2011 was at the centre of allegations concerning the suspect conduct of News of the World journalists. Was he second alleged victim of the infamous gangster Kenneth Noye?  And what part did his former business partner Jonathan Rees and the last to speak to him have in his murder?  Sid Fillery, who led the initial murder investigation, retired from the Metropolitan Police on medical grounds and took over Daniel Morgan’s position as Jonathan Rees’s partner at Southern Investigations.

In 1998 Metropolitan Police Deputy Assistant Commissioner Roy Clark conducted a third, secret, inquiry into the murder during which Southern Investigations’s office was bugged.  In December 2000, Jonathan Rees was found guilty of conspiring to plant cocaine on an innocent woman in order to discredit her in a child custody battle and sentenced to seven years imprisonment for attempting to pervert the course of justice.

Jason McCrossan spoke to author and journalist Peter Jukes who outlined the history of the case and developments that he himself has discovered that shine a light on links between journalists and met police which strike at the heart of the British justice system.