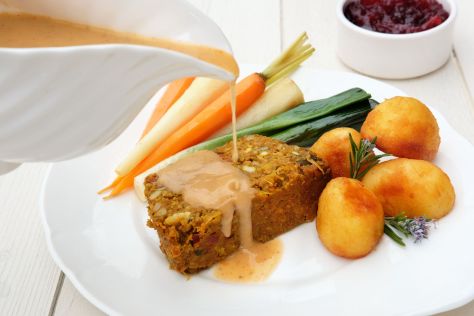 Christmas is the perfect time to enjoy great food – whether you are treating yourself or sharing with friends, family or neighbours. Add a sprinkling of inspiration to your Christmas kitchen with eight delicious dishes from the Festive Flavours collection.

Set the scene with a pea and spinach soup, Christmas galette or a zingy fruit and nut salad with chilli and lime. Then fill your plates with an indulgent cheesy lattice pie, a classic nut roast or a chestnut and butter bean Wellington. There’s even a smooth, rich Christmas gravy to make in advance.

Each week on the run up to Christmas I will be releasing two favourite festive recipes, starting tomorrow, for vegetarians like myself or for those who want to try something different – all from the Vegetarian Society Christmas Recipe Collection.

I will trying some, if not all these recipes myself and posting picutres of the results on this page.  I encourage you to send in your pictures as well.

Lynne Elliot, Chief Executive of the Vegetarian Society, said: “We have created a host of brand new recipes for you this year. To make sure everyone can join in and try something tasty, these recipes cater for both vegetarians and vegans. Some are gluten-free and there’s also a delicious dessert that is vegan and raw. You’re sure to find something you’ll love.”

Breakfast is seen by many as the most important meal of the day and we have known that many cereal staples, that make up our breakfast, can be full of sugars.

Health and nutritionist Amanda Hamilton – who is the UK based spokesperson of a new healthy breakfast cereal called Quinoa Crack – who tells us how we can get a free trial cereal box.

On Wednesday 9th December I was invited to the MoleculArt event with Bonnie Britain in the Bargehouse Oxo Tower Wharf, London.  As I was the +1 of Bonnie – I didn’t really know any more than there would be cocktails – and they would be free! Actually – that was as far as my interest ventured.

We climbed an array of barren brick walled stairs up to the 4th floor – into large dimly lit attic space with old heavy wooden floors and above them – metal air condition ducts that felt untouched by modern adornments – a space that was perfectly comforting in and of itself.

The first eye catcher was the cocktail lab – made up of old oil barrels and a plank of wood -minimal and moody -with bring pink, green and blue lights piercing the darkness from below and wrapping itself around the cocktail stand – which itself had implements resting upon it which wouldn’t look out of place in a science laboratory – as coloured puffs of smoke bellowed out of wide bottomed glass science beakers with a pretty lady pouring and fusing concoctions of green stuff into other stuff – to make stuff that looked like something one could throw down ones neck.

Beyond the scientific blending that was taking place in the popup lab – and at the far end of the attic – was a large floor to ceiling canvas – made up of 30 individual sheets of paper to combine into a whole – one piece out of many.

The canvas was lit by an image projected it on to it – later I learned that these were drug molecules. Laid out in front of the this display were numerous coloured paints, sprays and crayons.  All waiting to play their part in the making something different and unique.

In between the cocktail lab and overside canvas was a good looking young DJ who kept the beats flowing rhythmically and gave the attic space the feeling of being in a club – all be it – right at the very beginning of the night.

To the sides were projections of still images upon the brickwork – which also turned out to be drug molecules – or maybe food, or maybe alcohol.  I wasn’t quite sure.  The lab cocktails started to work and after a couple an unquenchable thirst grew from with – to head down to the canvas and draw, paint, splash, mash or trash – although I’m guessing if we’d done the latter – we’d of been asked to sling our hook.

I’m not sure if gender plays a part in this.  But I was definitely a grab, splash and dash artist.  Bonnie on the other hand – and many of the girls (although this is in no way scientific) – seem to take more time and care over their contribution – following the molecule lines that were projected against it – trying to make it meaningful.  At one point I did consider pouring black paint over one section that a lady had spent a significant amount of time crafting. And then, when her anger and hatred of me got the better of her and she stormed over and challenged me as to why I would do such a thing – my answer was going to be – “your anger and hatred and the memory and despising you harness right at this moment will last longer than the crap swooshes and characters you just spent 20 minutes working on – which would of been forgotten.  That is MY ART”.

But alas, I wasn’t quite brave enough and anyway, her boyfriend or companion was over 6 foot tall, rugby play wide and looked like he worked in the city and would of made mince meat out of me for upsetting his girl – friend or not. That would of been HIS ART.  And I didn’t fancy that.

We stood around and had yet another lab cocktail.  I read the invite again just to be sure what it was we were actually suppose to be doing.  It read:

“Drink a cocktail made by ABQ London, splash some paint on a massive canvas full of drug molecules with a few others and take home a piece of it.”

Ok, so more cocktails – more splashing and dashing.  By my 5th cocktail I was not only getting pissed – but creative.  Which was soon ruined when I tried to make the white paint run through the splash of red paint – which was left looking like a bit of a congealed mess.

At times the canvas was full of creative types -men and women of all ages – either pre-post or with a lab cocktail in hand whilst styling and filing shapes and symbols onto the paper – which was what the event was all about – people adding their own creative dimension to a large piece – which would be taken down and made into individual smaller pieces.  These 30 individual squares would then be given to each person as sign of their involvement in the bigger picture.

We never did get our individual piece. However, I enjoyed the event, the painting, the splashing and the dashing (back to the cocktail bar for another hit).

Here is how we got on… 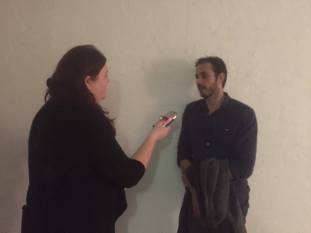 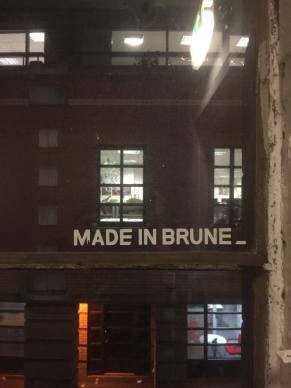 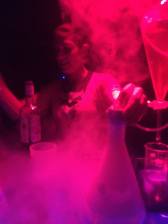 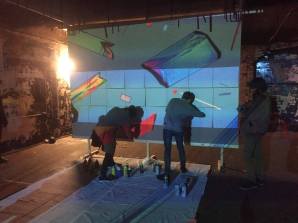 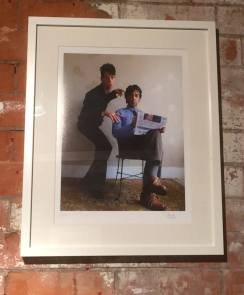 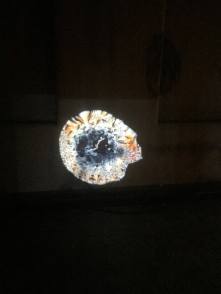 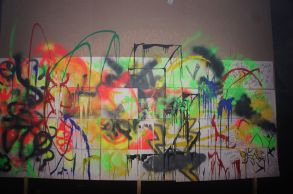 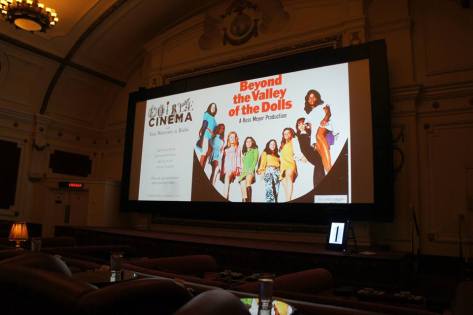 Monday Matters reporter Bonnie Britain went along to the Electric cinema for their Edible Cinema event – a unique way to experience a film: through aroma, texture and taste. Each guest is supplied with a tray of numbered mystery boxes containing a bite-sized tasting menu tailored to specific moments in the film.

Bonnie talks to the creators behind the idea – Ana Matronic of the Scissor Sisters & the British singer, musician and DJ Bishi.