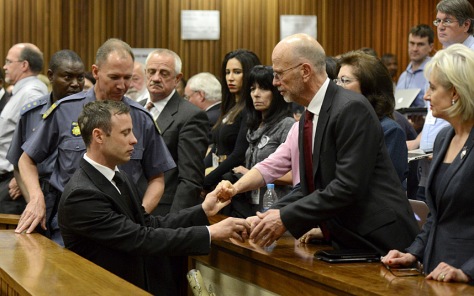 Paralympian Oscar Pistorius is to be released from prison on 21 August having served 10 months for the culpable homicide of his girlfriend Reeva Steenkamp.

Judge Chris Greenland discusses with Jason McCrossan why the trial Judge Thokozile Masipa got the verdict WRONG & what the likely outcomes will be leading up to the appeal.

Monday Matters with Jason McCrossan is broadcast on 106.9 SFM in Sittingbourne & Swale – also on www.sfmradio.com.

The featured group is Culture Club: 1961: Roy Hay – the guitarist celebrates his birthday on Wednesday. In the Night-Time Report – A judge has said that 69 people who “liked” a pupil’s Facebook boast about stabbing his teacher in the stomach are “sick”. This comes after a 14 year old boy was sentenced to 11 years detention. Madonna celebrates her birthday on Saturday – not quite the big 60 – but only a few notches away from it – she’ll be our tribute in music and interviews after 9pm.

In the final hour Jason McCrossan speaks to Judge Chris Greenland – a former South African High Court Judge to discuss the prospects of former para-Olympian Oscar Pistorius – being released on 21st August. Judge Greenland thinks the trial Judge got the verdict wrong – and explains why. Also – the music news; my favourite things & a return of Let There Be Love.