Apple announced an augmentation of their products, including a new pencil and raft of new features and functions at their event this week in San Francisco.  The event, which is held every year, always seem to have a varying amount of favourable coverage and success.  The main problem for Apple is that since the launch of suite of innovative products like the iPod in 2001, followed by the iPhone in 2007 and the iPad in 2010- the amount of self publicity that these innovative product launches created – means that these events never quite live up to what Apple people want.   The next future technology device.  Upgrades, new designs, stretches, add-ons, fancy features – although welcome, always fall short of what that people want.  Apple to lead.

What you can’t argue against is Apple is a lead marketer and promotional entity.  However, the question of whether it is a market leader in terms of it’s technology- as many Microsoft people like to point out – Apple is often seen as catching up where others have lead.  It is commendable that Apple customers hold the company in such high esteem  – but it is a curse that they have to deal with.

The new super sized iPad Pro, which has a screen size of 12.9 inches and a battery life of around 10 hours.  It measures 12 by 8.68 by 0.27 inches (HWD) and weighs 1.57 pounds.  You also get an 8-megapixel camera on the back with a front-facing camera with only 1.2 megapixel.  One new addition to the Pro: four speakers on each side.  The display features a 2,732-by-2,048 Retina display that which contains 5.6 million pixels. Under the hood you’ll find a new A9X chip, Apples 3rd generation 64-bit chip which should make it much fast than all that have gone before. 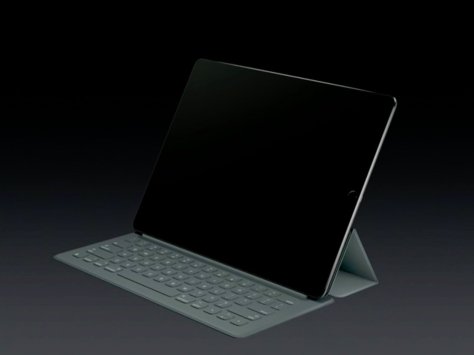 Apple also announced a portable keyboard specifically designed for iPad Pro. It has a smart connector for transferring power and data. Coated in a water‑ and stain‑resistant finish. 3.2mm thick.

As was expected, the iPhone 6s was released with new hardware, technological advances and features.  The screen size is the same – although they are a little thicker – but this time they introduced a new ‘rose gold’ colour.

New features include “3D Touch” technology which lets you apply different pressure to the screen to provide different options, such as their new sub-menu or “peeking” at a photo or web page.

The company’s latest set-top box, has received a major upgrade including a revised physical design, faster internals, updated remote, and key new features including a built-in App Store.  It will be fully integrated with Siri, the voice-controlled personal assistant of the iPhone. It comes with a touch sensitive remote that is used to select programmes, and is motion sensitive for use in gaming.  The Apple TV goes on sale in October.

The information comes from SplashData who complies an annual list of millions of stolen passwords made public throughout the year and assembles them in order of popularity.

Apple announced its Mac OSX software is to have a radical design overhaul, bringing its desktop and smartphone software closer together, and introducing a new feature called “Continuity” that lets users easily switch between the two.

I used to get excited at the thought of these conference – but year after, after year – rather than having my socks knocked off by the awe-inspiring wonder of looking into the future…I’ve always felt a little short changes.  Seeing those at the conference clap and whoop every 20 seconds – I’m sure they do the same when someone shouts lunch!  Apple probably think – “yeah we nailed another great conference” – which is fine if you are in a zoo playing to clapping seals…just don’t expect everyone outside the zoo to have the same zeal.

I neither have the skill, time nor dedication to build something like this – however, Richard Hutchinson’s ambition and achievement is admirable.

I read that he’d spent £10,000 converting his spare room into a replica cockpit.

Bliss was the name of the default computer wallpaper of Windows XP.  The photograph was made on June 24, 1996 for the digital-design company HighTurn by Charles O’Rear, a former National Geographic photographer.

According to O’Rear, the image was not digitally enhanced or manipulated in any way.  The image was captured from the side of the highway 12/121 with a hand held medium-format camera. The approximate location is 3101 Fremont Drive  (Sonoma High Way), Sonoma, California.

Excited about pictures of the new iphone 6?  Well according to a number of sources listed below and as detailed here – the “exclusive” leaked pictures that got the cyber geeks….leaking, are in fact fakes.

But did we really think Apple would be so sloppy at this stage of the design process?  It would probably be easier to shake the hand of Steve Jobs than it would be to smuggle out pictures of the new iphone 6….assuming they call it that. They could go rouge like they did with their IOS Mavericks release and called it – the iphone Indefinite

So, come on twitter…let’s get a grip and hold on to our knickers!!! (although I did sooo fall for this myself and tweeted the pictures…ooops!). Lesson learned…till the next time 🙂