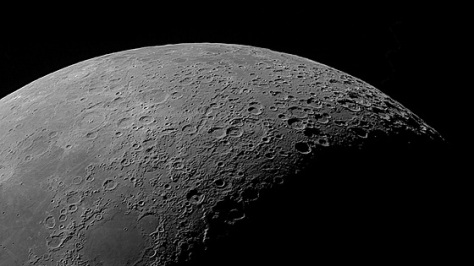 This face is variously sunlit depending on the position of the Moon in its orbit. Therefore, the portion of this hemisphere that is visible to an observer on Earth can vary from about 100% (full moon) to 0% (new moon).

The lunar terminator is the boundary between the illuminated and darkened hemispheres. Aside from some craters near the lunar poles such as Shoemaker, all parts of the Moon see around 14.77 days of sunlight followed by 14.77 days of “night” (the “dark side” of the Moon is a reference to radio darkness, not visible light darkness).

Mike Culley is from the Southend Planetarium and chats to Jason about NASA’s Rosetta mission to land on the 67P/Churyumov-Gerasimenko comet as well as his highlights of 2014 and a look forward to 2015.