Having left New York less than 3 weeks after the bombs went off in Chelsea district I felt a little unnerved by what happened.  I couldn’t quite work out why, until I remembered how secure I felt as I wandered around the hot and sweaty city – confident that I was more secure here than if I was to walk around a capital city of most European countries. As someone who works in London, and who still remember the events of  7 July 2005 vividly – as I marched through the streets of London, among the thousands of commuters, making my our way home on foot – or to the nearest available bus.

But of course, these days it is foolish to believe that you are 100% safe in any country.  Those days, sadly, are a thing of the past and I as someone who even works out where the exits are in a cinemas…just in case….. (usually at the front and therefore difficult to get to) – I had assumed that being in America, far away from lines of desperate migrants trying to find safety in a European home – I’d be far away from the troubles – but I guess, the terrorists desire is that we are never far away.

Luckily the statistics around being caught up in a terrorist incident are quite good “Even if the current level of attacks continues for 80 years (which would be unprecedented), a child born today…would have only one percent of a one percent chance of being killed in one.” 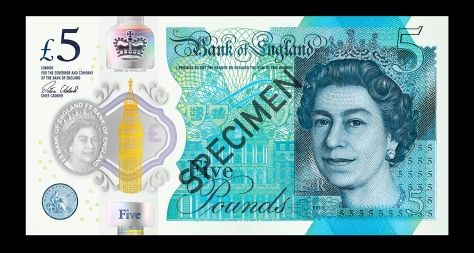 TheBank of England has cooked them in ovens, drowned them in red wine, stuck them in the microwave and run them through a 90C washing machine cycle with Persil washing power. It reckons the new £5 plastic notes – which go into circulation on 13 September – will be warmly welcomed by the British public. Jason chats to about the new £5 which is due to be released later in summer. Jason speaks to Jonathan Calloway from the International Bank Note Society.

From today, anyone watching BBC programmes only on iPlayer will be required to buy a TV licence to view the content.

Previously a licence was only needed to watch live broadcasts, so catch-up content was technically exempt from the £145.50 annual fee.

But due to a change in the law, a licence will be needed to download or watch BBC programmes on demand.

Those who already have a TV licence will not be affected.

The change comes after the government said it wanted to modernise the current system, so those watching catch-up TV do not get “a free ride”.

The new rules apply to all devices used to access iPlayer – including laptops, smartphones, tablets, TV streaming devices and games consoles, as well as through third-party services such as Sky, Virgin or BT.  However, a TV licence will still not be needed for watching other on demand services, such as ITV Player, All4, My5 or Netflix.